Would it feel good if the festival of lights came twice in a calendar year? It sure would. This is where Chandannagar, with all of its history and colonial architecture, provides four more days of dazzling lights and festivities to those who belong there and also the spectators who visit the town from other places.

The origins of the Jagadhatri puja as we know it remains unknown even today. However, it is believed by Chandannagar residents that the puja was started in the early 1750s and the goddess continues to be worshipped by more than 250 puja committees till date. The festivity is visited by tens of lakhs of people every year, resulting in a real-time challenge for the police force involved to maintain peace and calm throughout the festival days. 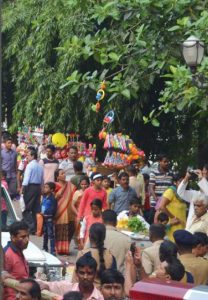 Although, a few days of festivities for the common man turns into a kind of overdrive for the police personnel, the latter work tirelessly day and night to maintain the law and order. Added to that, this was the first time when the Chandannagar Police Commissionerate handled such an event after being established only a few months ago. Considering the fact, Deputy Commissioner of Police, Sumit Kumar, had a lot to talk about the engagement of the force during the famous festival in the town.

“Jagadhatri Puja is one of the most important festivals here,” he said and added, “In the entire West Bengal, the Jagadhatri Puja mostly takes place here. During the puja, people from Kolkata and nearby districts visit the place. The record footfall every day stands at more than 10 lakhs, which is astounding. These are very small places — Chandannagar and Bhadreswar — where the Puja takes place in more than 250 places and those who visit here, visit them all.”

“During the puja, the town is closed from every direction,” the DCP said. The officer also revealed that the spectators, who travel by bus, train as well as launches, include many VIP personalities, such as judges, prominent journalists and senior bureaucrats. He also stated that despite the huge footfall, security arrangements have never come under scanner as the newborn Commissionerate, with the help of the local police station covered approached it brilliantly. 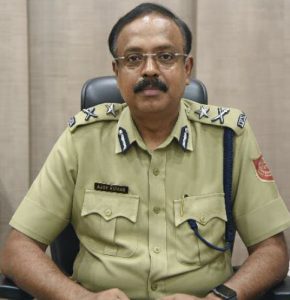 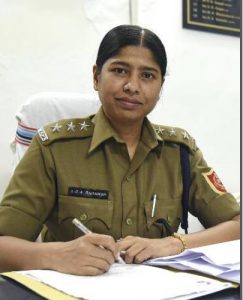 “Our target was the spectators who came here for pandal hopping had to go through minimum inconvenience and no big law and order problem or crime arose out of the blue,” the DCP said before adding, “For this, we divided the entire area into different clusters, every one of which had its own inspector.” He also elaborated that the massive number of spectators caused the roads to close down, resulting in denying movement of motor vehicles. For this reason, the Commissionerate decided to divide the area into clusters, with a huge number of police personnel to complement each cluster during the festivities. DCP Kumar also revealed that the Commissionerate made sure that the force patrolled throughout their clusters, paying special attention to crowd management. This made the existing police force to be more efficient and helped to keep the law and order intact. 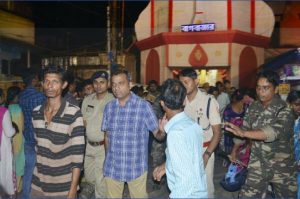 Regarding the clusters, DCP Kumar revealed that the Commissonerate underwent certain special procedures including crossing over the Ganges on ferries. “We also put some of our personnel in that zone,” he said before adding that this resulted in the contention of crimes along the river banks, which otherwise would not have been possible.

“We also used our DD (Detective department) extensively to counter crimes in the ferry crossing as well as in other parts of the town. We also used almost 3,000 personnel during the festive season,” he revealed. The official also stated that technological monitoring, such as CCTV feeds and drones helped the police to control the crowds systematically resulting in huge success on the newly established Commissionerate’s part. 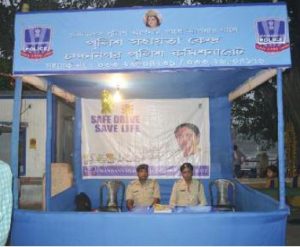 ACP Rahman also pointed out it was a challenge for the police stations as well as the Commissionerate to successfully fulfil their duties during Jagadhatri Puja despite the deployment of such huge force because of the sheer number of people visiting the area. Apart from the technological help, she maintained: “We used motorcycle patrolling during the peak hours. This made a huge impact on the criminals as no big crime was reported.” She further added: “There was also police personnel in civil clothes to handle eve-teasing and petty crimes like those.”

Although a new found police outfit, the Chandannagar Commissionerate has been doing some extraordinary work since the day of inception. Talking about all of it, the newly appointed Commissioner of Police, Ajoy Kumar, discussed his life, job and challenges.

A graduate of the 1993 batch, the Commissioner spoke about how he opted to join the police in his initial days. “The police is an outfit where the interface with the public is very high compared to other services. Although there are challenging times,, it is important for me to reach out to the common people,” Commissioner Kumar said while talking about how he became the officer he is today. 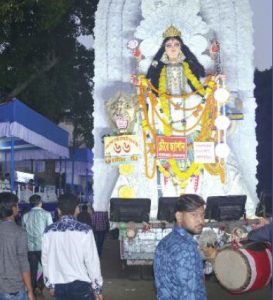 “I am the first police person in my entire family,” the Commissioner says before adding: “There is a particular concept about the police in people’s minds, you know, but when one joins the department, it is a completely new and different feeling.” Talking about the challenges the uniform brings, the Commissioner mentioned about the expectations of the common people, which he defined as a complex yet must-do job for the personnel. He also spoke about the personal lives of police personnel, saying it might be so very hard to stay away from their families on festivities, but it is a sacrifice the personnel are keen for the greater good of society.

The Commissioner spoke about community and social connect and revealed that it is high time for the uniform holders to connect more and more with society and those living within it. “You see, since the past few decades, the police have become friendlier with the masses and I think we have to be even friendlier in order to work more closely and efficiently,” he said. “We would also need cooperation from the public as I think the police should command respect, rather than demanding it.” 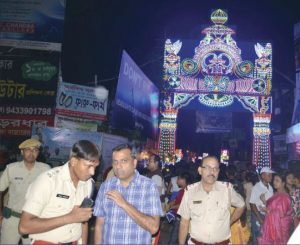 Talking about the challenges during his time at the Commissonerate, Commissioner Kumar said he did not have much difficulty controlling the scenario in his new-found jurisdiction. “We do not have many instances of dacoity or violent crimes. It has been dealt with from before. What we do have here are cases of rowdyism and extortion. But, to be honest, the rate has significantly dropped these days,” he said. “On the other hand, regarding crimes against women, we are doing preventive policing. There have been some cases of theft and we are monitoring the area very carefully for that.” The officer also pointed out to the establishment of the Detective Department as a means to handle urban crimes, which have been a massive force to deal with the crimes in the ‘formative stage’ of the Commissionerate.

As pointed out earlier, the Commissioner also elaborated on the new Commissionerate’s role in community connect with several initiatives. “There is an ongoing Safe Drive Save Life initiative. We have also organized blood donation camps as well as sporting events.” Commissioner Kumar also spoke about a certain incident where the Rishra Police Station took the initiative in the marriage of a helpless girl. He also revealed that thoughts are ongoing in a rehabilitation process where known criminals would get help to get back to normal life. With a bright hope for a perfect future, the Commissioner concluded that upon functioning properly after some time, he hopes to establish the new-found Commissionerate as one of the finest compared to its counterparts in the state.