A midst the ever-growing roars of scores of football fans filling up the streets of Kolkata and hoardings that promised a mega extravaganza in our beloved city, the logistical and security implications of such a grand event of international prominence brought forth an unprecedented challenge to the police establishment and the bulk of it fell on the shoulders of Bidhannagar Commissionerate. Here are excerpts from their perspective on the event:

“During the Under-19 World Cup, the role of police is a testament to the professionality and teamwork of our police force.”

This Under-19 World Cup has been a learning experience for all of us. An event of such magnitude and the vast challenges, both logistical and security it brought along, is somewhat unprecedented in our history as a policing institution. Twenty four teams participated in this event, which meant meaning we had to liaison with all those country’s security apparatus to ensure smooth sailing. We worked with the civic bodies as well as other government and non-governmental organisations. The number of gates through which the stadium can be accessed, we also created service roads to ensure that pedestrians do not face the problem of over-crowding. Special parking zones were set up especially for this particular event. It is a matter of tremendous pride that we, as a team, were able to perform so well and make sure that the event got over without a hitch. During the Under-19 World Cup, the role of police in it is a testament to the professionalism and teamwork of our police force. We had posted about 3,700 personnel for this event and looking back, it was quite challenging but a rewarding experience at the end of it.

“The most important take away for me from this entire experience is that, it showed how essential and efficient teamwork is and how it can overcome any given number of challenges.”

I was posted in the traffic control room during the Under-19 World Cup. In our control room, we had real-time footage. We had 4k and PTC cameras around the stadium, in total there were 242 cameras. The headquarters was headed by Santosh Kumar Pandey (DC Headquarters) with Surojit Dey (DSP) and with their guidance we took on the challenge head-on. Our work ranged from ensuring that every gate is accessible to supervising the safety instruments inside the stadium. We also took care of the pre-game formalities and essential checks and balances, such as assisting bomb squads and logistical personnel. The most important take away for me from this entire experience is that it showed how essential and efficient teamwork is and how it can overcome any given number of challenges. 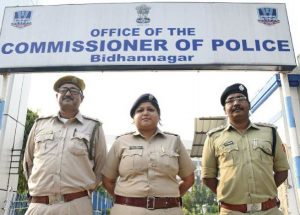 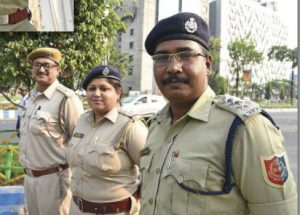 “We worked together with Kolkata Police, Kolkata Municipal Corporation and other civic bodies to create the best possible safety and easy passage for pedestrians and vehicles.”

We started preparing for this mega event three months prior to the inaugural ceremony. I, personally, took it as a challenge as a traffic inspector to ensure smooth vehicular movement and convenience on road during the Under-19 World Cup. We had a no-compromise attitude towards this whole event as any minor mismanagement would entail an international issue. With that in mind, the entire Bidhannagar city Police force with the CP leading the way took on this challenge. We worked together with Kolkata Police, Kolkata Municipal Corporation and other civic bodies to create the best possible safety and easy passage for pedestrians and vehicles. We charted out parking spaces, vehicular and pedestrian routes and road fencing so that everything can be done in unison and in an organised manner. We prioritised parking spaces in and around the stadium so that the spectators do not have to walk any more than needed to enjoy a good game of football. We also compartmentalised tasks amongst ourselves, as there were international teams and we also had the Referee headquarters based in our city.

“This training has brought a new-found confidence in myself and my ability to deliver my undertakings as a green police.”

This is the first time I have witnessed an event of such grandiosity. The training that we received for the U-19 World Cup has really helped us in reaching our full potential. During the training, we learnt the basics of crowd management and how to control and direct crowds through heavy traffic or congested areas. We were also taught how to pacify an agitated individual and how to find solutions without further aggravating the situation. We have managed the famous Kolkata derby before but the difference between the derby crowd and that of Fifa or ISL is the sheer temperament of the crowd, the latter being much more organised and in control of one’s emotion. This training has brought a new-found confidence in myself and my ability to deliver undertakings as a green police. The reason that we did our duties without any hiccup is because of unflinching support from our supervisors and seniors who guided us at every step.