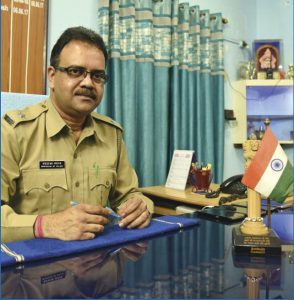 With hardly two minutes of walking distance from the newly founded Chandannagar Commissionerate and the Hooghly District Court, the Chinsurah Police Station operates within the municipal towns of Hooghly-Chinsurah and Bansberia.

One of the most efficient police stations under the Commissionerate, it recently came into the limelight with the arrests of two persons carrying illegal firearms, associated with the comparatively high profile case of Bhadreswar Municipality Chairman Manoj Upadhyay’s murder. With the emergence of the newly found Commissionerate, the Chinsurah police station has come under the purview of a new limelight with its unique way of solving different crimes and establishing it as an example in the entire district.

The Officer-in-Charge of the police station, IC Nirupam Ghosh, spoke in detail about his profile and the station’s day-to-day operations and challenges. A veteran with an experience of 26 years under his belt, IC Ghosh joined the force in 1991. A resident of Asansol in the Burdwan district, he has been appointed throughout the state such as in North 24 Parganas and East Midnapore. A commerce graduate during his initial days, Ghosh spoke about himself and how he ended up joining the force two decades ago. Excerpts:

“I studied commerce. After I finished my study, this was my first job and since then, I am here,” Ghosh said. Answering another question to whether it was his aim to join the forces, he replied: “I never thought about it. But, it was the first opportunity I got and you can say I am happy with my profession. I love this job and I never thought about anything else. To be honest, I also didn’t have time to think about doing other jobs. This is my mother district, I did my training here and after that, I joined up in Hooghly itself.”

Speaking on the jurisdiction, he added: “Our jurisdiction starts from Chandannagar in the South till Bandel in the North, the Ganges in the East and the railway station to the West. The area is around 52 square kilometer.” 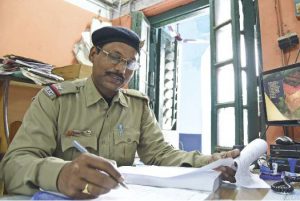 The officer talked about technological developments of his force in the station. He also maintained that CCTV footages throughout his jurisdiction had helped the police during the Durga Pujas, which he looks forward to using in a more efficient manner in the future. Talking about his experience with the local community, he said that the locals were helpful in the last Durga Puja, who helped the police station to mobilize volunteers. This resulted in the police taking a breath of air and keeping an extra eye on the roads as well as on important junctions in the town. This helped the 12-manned police stations go an extra mile keeping the calm intact in their respective jurisdictions.

“We have been doing some excellent work regarding connecting with the community here,” the IC said before adding: “We have organised multiple blood donation camps, football tournaments. There is a Safe Drive Save Life initiative ongoing between the children of schools,” he added.

The Officer-in-Charge revealed that the jurisdiction of the police station has a mixture of crime and criminal activities. “In the town, there are certain small to moderate crimes although the activities of the criminals are minimal,” he said before adding that the rate of larger crimes has gone down in the jurisdiction considered to previous years. He also stated that although the station does not have any specialised units, the officers have been extremely cautious about the different crime reports and have dealt with those successfully.