An emerging medical facility even a few years ago in the country, trauma care has come a long way in the last decade. With the development of this certain section of the modern day medical science, disasters on the streets of our surroundings as well as self-propagated attempts to harm one’s self have found its way towards the rock bottom. Due to the constant recommendations and guidelines of World Health Organization (WHO), trauma treatment services have come into the light in rural India too, much like what it has done in the cities.

With the inception of the modern day technological developments, traumas, both high and low-velocity ones, had taken accidents to a particular red alerted level. While talking about this particular topic, Dr Somnath De (Clinical Director, Department of Orthopedics & Traumatology, Peerless Hospital & B. K. Roy Research Centre) said: “I used to spend most of my time in the operation theatre repairing poly trauma cases.” However, he also mentioned: “The numbers of the road accidents are reducing, the reason of this may be the ‘safe drive, save life’ initiative.”

He also hailed the Government of West Bengal for introducing speed detection cameras and said that this initiative has been able to check speed considerably, mostly among the rented cars and commercial vehicles.

However, despite the decreasing threats from road accidents, the expert feels life-threatening games such as the Blue Whale and the trends of selfies are increasing the trauma affairs in the contemporary times.

Talking about the immediate steps after an accident, Dr De sounded clinical opining about the said scenario. “We need the police as soon as possible for medical assistance. There is a need of awareness here,” he said. IHIF research (2011) has shown that police, often the first responders in road traffic accidents, are not trained in basic first aid and have no access to basic first aid equipment. 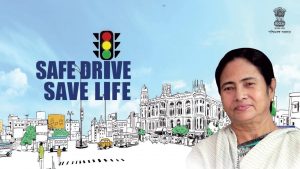 According to the orthopaedic surgeon, the necessity of proper training of the traffic police, who tends to be the quick reaction authority, is to take the proper care of the person(s) affected in an accident. In a recent statistics published by the Indian Head Injury Foundation (UK), the organization revealed that 95% of head injury victims in India do not receive optimal care during the “golden hour”, a fact supporting which Dr De said: “Peerless Hospital is currently running a training program. The program focuses on how to handle an injured person, how to take care of the airways and how to shift the person to an ambulance or a car.”

The expert also opined on how to combat the various issues that lead towards traumas and orthopaedic problems. Not only by enacting different laws and installing technologies throughout the city and beyond, the surgeon revealed that he also feels the relatives of the modern day youngsters need to keep an eye on their driving skills. “The family members should teach them how to drive a vehicle,” De said before adding: “Also when a car is delivered from a particular showroom, they should also conduct an awareness program.”

The aftermath of a trauma injury, especially after road accidents tends to put a smoke screen in front of those affected in terms of treatment. Improvement in emergency care in India depends on the establishment of functioning trauma care systems. IHIF has taken many steps to improve Primary Trauma Care, training many first responders, doctors and nurses in Primary Trauma Care to improve post-accident emergency medical care. Elaborating the said subject, Dr De put his faith on a ‘multi-disciplinary’ approach, saying the patient needs to be at a hospital with the necessary surgeons as relatively small nursing homes lack all the trained personnel and infrastructure needed for the treatment.

Contemplating the trauma care system in India and saving many lives, it should be once again highlighted that the establishment of hospitals with heavy financial burden should not be the goal of policymakers. However, improving the current hospital infrastructure to treat severely injured patients should be undertaken. Training of personnel in acute care and pre-hospital services should be a priority in the country. Proper organization and administration of trauma services along with legislative backup will go along way in strengthening India’s essential trauma care services.