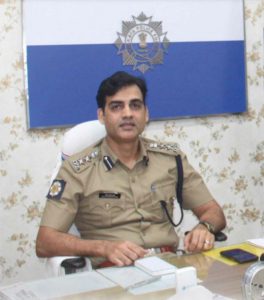 Q. From where did you get the inspiration to join the Indian Police Service?

A. Every student has a dream to become an IAS or an IPS officer. I had also nursed a dream since my childhood to join a uniform service. I applied for the recruitment of sub-inspectors and also appeared for the Combined Defence Services (CDS) examination, but could not find my name among the list of successful candidates. Thanks to my stars, I finally got selected in the UPSC and joined the IPS in 2008.

Q. How was your academic record?

A. Till class 10th, I was an average student. After that I started taking my studies seriously. I am from a rural background, where students generally don’t get much career-related guidance. I did my graduation and then completed LLB. After that I started practicing in Varanasi court. But I did not like the work, and decided to appear in the competitive exams. First, I started preparing for judicial services. While preparing for judicial exams, I started appearing in the UPSC exams too. During my preparations, I completed my Master’s Degree and B.Ed. from Lucknow. In 2007, I gave four exams, UPPCS (J), U.P PCS, APO and UPSC. By the blessing of God, I qualified in all exams.

In UPSC, I gave IPS as my first preference. My rank was AIR 69, I could have become an IAS officer but since I opted for IPS, I joined the police service and was allotted West Bengal cadre.

Q. You have worked in different capacities in the police service. Please tell us something about your various stints?

A. After joining in West Bengal, I got my first posting as SDPO Jhargram. Maoist issue was at its peak at that time in West Bengal. I enjoyed that tenure. Then, I served as DCP North Howrah, SP Birbhum. DCP South West Kolkata, SP Dakkhin Dinajpur, Commandant 2nd BN Barrackpore, SP Baruipur and now DCP South Suburban division.

Q. South Suburban division has been an important area. How do you take care of your responsibilities?

A. South Suburban division consists of eight police stations, having around 25 lakh population. There are different types of challenges in the area, like cheating cases, bank frauds, crime against women etc. Kolkata police is organising a campaign to sensitise  people so that they can save themselves from bank fraud and cheating. In the South Suburban division, we are trying to cover the maximum area with the police deployment to prevent crime. If any crime occurs, we immediately catch the accused and put them behind bars. We also get regular guidance from our learned Commissioner of Police and other senior officers.

Q. It is learnt that you are always available to the public as you believe that it’s  the police duty to serve people. How do you manage time to keep in touch with people under your jurisdiction?

A.  Yes, I am always available to the public. I believe that I am a government servant and I am here to serve the people. You know that if any person is in pain, or having any problem, then only he or she will go to the police. So it is our duty to meet and listen to them, and guide them. If I am available in the office, I will meet with all visitors. If they need, I give my mobile number to them.

Q. You have done a remarkable job on combating human trafficking during your tenure as SP Baruipur. Are you continuing with this work even now?

A. When I joined Baruipur, I came to know that more than 200 girls were missing. Some of them were minor also. I formed an Anti Human Trafficking Unit (AHTU) involving many NGOs and state units. We recovered many girls from different parts of the country. I want to mention a special operation, conducted in Pune city. We took the help of IJM (NGO) and rescued many from Pune brothels. We came to know that around 25-30 girls from West Bengal were there. I sent a team under the leadership of woman police officer Kakali Ghosh and recovered 23 girls. But most of them were unwilling to come back and were major also. With the help of Pune Police, we arrested four accused persons from there and brought them to Baruipur. We are keeping a close watch that no girl gets trafficked for flesh trade.

Q. Kolkata’s biggest senior citizen population falls under your jurisdiction, how do you manage it? What are you doing for them?

A. It’s true that the maximum number of senior citizens is staying in the south suburban division. We have a programme named ‘Pronam” through which each police station is keeping the details of  senior citizens, especially those staying alone. We are providing help to them. Mobile numbers of nodal officers and police stations are given to them. Each police station keeps in touch with them on a daily basis. Policemen also visit their houses and look after them.

Q. What are your major achievements over all these years in the police service?

A. For me the only achievement is that if people are happy with your performance, you have passed the test. I try to meet people in distress, help them in sorting out their issues. If superiors are satisfied with your hard work, you can’t expect anything more.

Q. You are known to be a fitness freak. How does it help you in discharging your responsibilities? Does that motivate others or create pressure on your peers?

A. Yes, I am a fitness freak. In fact one thing I have noticed in West Bengal is that most of the officers are fitness freaks. I keep one hour aside for doing physical work and exercise. In my opinion, if I am fit then only I can motivate my subordinates to keep themselves fit.

Q. How do you spend your leisure time?

A. After my office work, I love to spend my time with my family. I want to be with my son who is four and a half years old.

Q. Who is your favourite author?

A. I am not much interested in reading novels or fiction. I like to read small stories. My favourite writer is Shakespeare.