The Detective Department of the Kolkata Police is one of the oldest units of the country.

Way back in 1868, this department was set up primarily to control crime in the city. A century later, the horizon of the Detective Department has been widened to tackle various types of crime. On one hand, there are investigative units and on the other, there are supportive units to facilitate the entire procedure. As far as the Criminal Intelligence Wing of the Detective Department is concerned, there are five squads, namely the homicide squad, anti-dacoity and robbery squad, anti-snatching squad, anti-burglary squad and the watch section. The watch section is undoubtedly a unique one, focusing on prevention and detection of crime in the city.

Ever since its inception, the whole focus of the Watch Section of the Detective Department has been to ‘watch’ and ‘monitor’ organisations and institutions of repute and prevention and detection of crimes committed on streets.

The task is not a simple one as 24×7 rigorous monitoring requires a strong network of personnel, equipped with most modern technology and understanding of the changing trends of crime in Kolkata. On the streets, men and women in plain clothes of Watch Section of Detective Department are always on the lookout to prevent and detect pick-pocketing, lifting, cutting off bags with valuable articles, doubling and all sorts of cheating on the road and in public transport, market areas, banks, metro railway stations, railway stations and other congested areas in the city.

The Watch Section Department of the Detective Department is at the Lalbazar headquarters only.

Pradip Kumar Ghoshal, the Officer-In- Charge of the Watch Section of the Detective Department remarked, “The duties and responsibilities of the Watch Section require round-the-clock monitoring. The last two decades have witnessed a paradigm shift in the crime pattern of the city. Traditional theft and burglary cases have been replaced by theft of mobile phones, electronic gadgets and other items. Every day, thousands of people come to Kolkata for work. All over the city, personnel of our department work hand in hand, ensuring safety of the city and its citizens.” 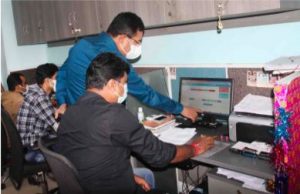 Interestingly, the Watch Section has received accolades across several quarters for tracing and recovering of missing and stolen mobile phones. In fact, netizens have congratulated the Kolkata Police for such swift action throughout the year. From August 2020 to August 2021, 3,862 mobile phones have been traced and recovered by the Watch Section of the Kolkata Police.  According to Sub Inspector Amar Biswas, “The mobile tracing unit has been super active, working in coordination with the Crime Control Room (CCR) and the local police stations.

“There is no denying the fact that the diverse nature of crimes demands up-to-date crime intelligence methods with a strong network – the Watch Section of Detective Department has successfully nabbed the Gujarati Gang and the Banjaras, who have been the chief culprits in many criminal cases in recent years.

OC Pradip Kumar Ghoshal added, “Earlier, I was posted in the DD Watch Section in the early 90’s. The workload and the modus operandi have changed considerably. I can definitely vouch that whether during Durga Puja, Diwali, Eid, Christmas or other festivals, our personnel in plain uniform work tirelessly. Foot patrolling at junctions and key areas remain our focus. We request common people to stay vigilant and report in case of any crime.”

Apart from mobile theft, cases pertaining to cheating at ATM counters, gold polish, doubling of currency notes, cheating by introducing as fake CBI Officer, police officers have increased. The Watch Section team is committed to the task of safeguarding the interests of the city. Very recently, Kolkata has been rated as the safest city to live in India, for the second year in a row. Credit goes to all the men and women serving the Kolkata Police with genuine commitment for the safety of the city at large.