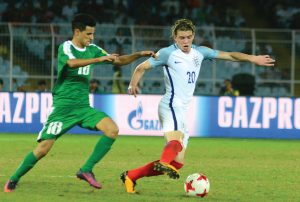 It’s just about a fortnight to go before India hosts its first major FIFA tournament– the Under-17 World Cup and naturally the buzz around the mega event is growing louder and louder with every passing day. The event, which kicks off on October 6 at the national Capital and ends with the final being played at the iconic Salt Lake Stadium on October 28, is expected to put India on the global football map.

For India, who have qualified by the virtue of being the host nation, it will be a litmus test both on and off the field. Coached by Portuguese Luis Norton de Matos, the boys have travelled and trained extensively in anticipation of the daunting task that awaits them. It’s not only the players but the nation as whole that will be the centre of attention for almost a month.

Up For A Thriving Football Economy 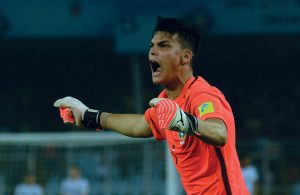 Participants from 23 countries will arrive here for the prestigious tournament and it will be a great opportunity to improve India’s standing amongst the world football community. Or as former India skipper Bhaichung Bhutia puts it: “This prestigious tournament will only help the country in its bid to raise the profile of football. If the players produce good results in the tournament, it will be a motivation for the country and the players to do even better (in future).”

Besides the technical nuances of the game, the business of football is an area that will get a major face lift due to the event. With 24×7 media attention, the event will reach out to a whole new bunch of prospective investors.

Sport is a huge business globally. It accounts to anywhere between $480-620 billion worldwide and India is still largely untapped.

According to an Ernst & Young (EY) Economic Impact Assessment, the Premier League and clubs add up to £3.4 billion to the United Kingdom’s economy and £2.4 billion in taxes to the Exchequer. Besides that, the league has created around 1000 jobs.

Although we are very far in terms of reaching such economic prosperity in sports, the tournament can act as an ideal launch pad. India’s huge population is always seen as a great market for sports business. The recent boom in league-based sports is just an indicator of how much investors are interested in the Indian market. 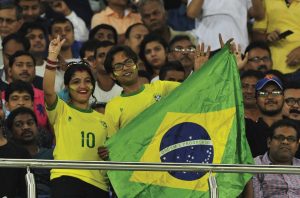 What’s encouraging it is the fact that India is slowly realising its potential beyond cricket. With the advent of the glorified Indian Super League (ISL), football has received a shot in the arm. According to figures provided by the officials, the league has become among the top five watched football tournaments across the globe. With India gaining recognition in the global front, the U-17 is only going to boost the country’s image further.

Predicting the long-term socio-economic benefits of organising tournaments at such a grand level is far from easy. The tournament will bring in money, majorly via television and sponsorship but it’s up to the federation and the officials to harness this spark. 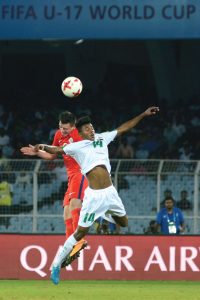 In case of Brazil, who hosted the 2014 World Cup, studies have shown that the short-term economic spike has gone down drastically in following years of the event. “The Cup generated a lot of interest but no lasting business,” said Salvador Saladino, head of the Brazilian Incoming Travel Organization, a year after the tournament. India should learn from the mistakes and ensure that the nation doesn’t fall back.

Another area that will get a major boost is sports tourism, a sector which still has a lot of scope to expand. India has always fascinated foreign backpackers. Although the country has hosted various international events, including the 2010 Commonwealth Games, the U-17 World Cup is expected to bring in unprecedented number of visitors.

According the Delhi’s Indira Gandhi International Airport Foreign Tourist Arrivals (FTAs) from October 1-14 (the period of the Commonwealth Games 2010) stood at 75,606.

It won’t be surprising if we see an increase in the numbers.

The fact that we will behaving teams from 23 nations, who have qualified from six continental competitions, visiting India, is bound to bring in travelling fans and family members.

It is often spoken about poor infrastructure being one of the biggest issues ailing Indian football, but in the run up to the World Cup, all the venues have been massively revamped to meet FIFA standards. The biggest test would be making the best of these facilities post the 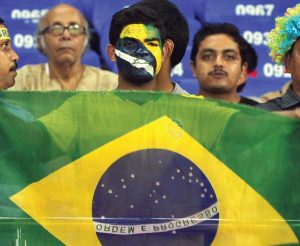 event. In England the UK football enjoys a stadium usage of 95%. Better infrastructure will naturally improve the standards of football and attract more youth to the sport. As the numbers increase, so will the leagues creating a holistic football environment.

The Vivekananda Yuva Bharati Krirangan, better known as the Salt Lake stadium in Kolkata, deserves a special mention. The 66,000 plus capacity facility has seen a massive transformation, thanks to smooth coordination between the organisers and the state government who left no stone unturned to make sure the strict dead lines and standards are met.

There has been a whole lot of effort that has already gone into it and will be put in staging this global event and the real task will begin the day the tournament ends. The short boost must be harnessed in to something long standing and enduring.