Mrityunjoy Bandyopadhyay, CEO of WBKVIB, speaks on garnering huge support for the dying art form and how, amid extreme difficulty, the Bengal government through Biswa Bangla took the initiative to revive the state’s very own muslin industry. 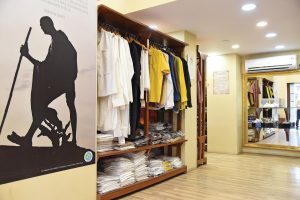 Hundreds of years ago, Bengal announced itself to the world with one of its indigenous art— the Muslin. However, as the years went by and technological developments kick started in the modern world, the art and craft of Muslin skyrocketed in expense. This resulted in a partial breakdown in the weaving of Muslin, making the weavers and the future of the craft vulnerable.

Despite this, the art of weaving Muslin stayed alive throughout the British rule and in the contemporary times, it continued with a handful of weavers in Bengal’s countryside. Now, with the establishment of Biswa Bangla a few years ago and the constant supervising of the organization to revive the dying culture of Bengal’s art and craft, Muslin has been climbing up the ladder and is all set for a grand comeback.

One of Bengal’s own?

According to historians and archaeologists, Muslin has been part of the Indian culture since as early as 5,000 years ago. The archaeologists have found Muslin of the finest weave in the excavated sites of the Indus Valley Civilization. Although, documents from the middle ages suggest that origin of this finely-woven fabric is from Dhaka in ancient India.

With all the modern technology and marketing strategies being poured in to weaving of Muslin, West Bengal currently produces 55% of the entire Muslin production in the country. A work of immense skill and patience as well as craftsmanship, the state currently produces Muslin yarn of 500 threads, with the potential of producing even better qualities.

Biswa Bangla, an organization of the West Bengal state government, was tasked with the revival of several extinct or almost extinct art forms after its inception. The officials, along with marketing executives as well as fashion designers, in league with Muslin experts (mostly weavers) set out on a mission to provide a fresh lease of life to this dying weaving art. “There were 60 or 65 of weavers left in West Bengal when I first joined here,” said Mrityunjoy Bandyopadhyay, CEO of WBKVIB, while talking about the extreme difficulty Biswa 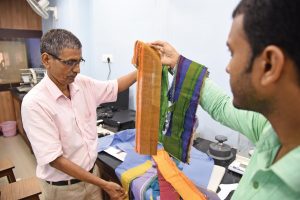 Bangla had to go through. He also revealed that the weavers weren’t making any sorts of income by weaving Muslin and hence opted to join 100-days-work instead to support their families. “We provided them with new handlooms, replaced the old charkas. Some weavers were also provided with necessary training by expert weavers,” revealed Bandyopadhyay before adding: “This helped us to increase both the quality and quantity.” The organization also set up laboratories intended for quality control, which helped in keeping the products subjective and marketable. The very first steps of the revival of Muslin were soon followed by a more psychological marketing approach. “Khadi is known to be so weather friendly in this region that it is called the air-conditioned fabric,” headded. The official also revealed that the skin and temperature friendliness of the fabric was the primary marketing strategy that was taken up by his organization in the quest.

Armed with ground breaking marketing strategies, the fashion designers, working on a PPP model with Biswa Bangla, were tasked with creating contemporary fashioned garments. This move was purely influenced with the idea of impressing the younger generation, who held a mindset that the Khadi fabric just belonged to the comparatively older generation. These new ideas were showcased through several fashion shows, a chain of which often saw youngsters with different tastes in garments take part in the process. The price of the products was kept at a reasonable margin, which helped to sell the stockpile with ease.

Revival of the exportation 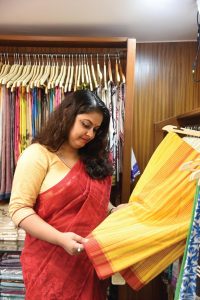 Instead of opting for a formal exporting strategy, Biswa Bangla chose to operate the exportation of Muslin goods in an innovative manner. Several small tours were designed by officials at the organization, coordinating with those working on the project. These tours focused on Muslin weaving places such as Berhampur and Baluchar, which happen to be the primary outlets responsible for braiding Muslin clothing. Sales outlets and home stays have been setup in the areas for foreign tourists to spend time and experience the craft. This idea has complimented the art of Muslin weaving in a huge scale, amounting to sales worth Rs 2 and a half lakh overnight. Pilot projects with pre-orders have also been going on for a while and have seen a huge jump in the sales chart.

One for the future?

Despite acquiring success in a limited period of time, the Biswa Bangla official denied admitting that the Muslin is already a well-established product. “We lack even more efficient marketing strategies,” told Bandyopadhyay, pointing out to the overwhelming response and lack of supply of the Muslin clothing that has limited Biswa Bangla’s approach to circulate it on a global scale. “What we produce mostly sells in the southern India,” he revealed before concluding, “and we don’t have additional supply, growing the Muslin more is still a possibility.”

As told to Subhajit Bhattacharya