The nation is flooded with the mega wave of digitization and it is likely to grow manifold in the coming years, says a report tabled by the global research agency.

The number of internet users galloped and swelled since 2012. Presently, more than 27 percent of the population of India is addicted to the Internet, says the survey. Facebook is leading the pack by wooing maximum users.

The enhanced mobile and web penetration is propelling the growth of the social media platforms, experts believe.

The social media boom has not only changed the socio-political landscape of a young nation like India but it has also laid new challenges in front of the law enforcement agencies. Kolkata Police, being one of the elite police forces of the country, has started to make leeway into the world of social media to meet the emerging demands of urban policing.

The men in white forayed into the world of social media in 2013 and created an instant connect with the denizens of the city by creating a corridor of communication. The KTP (Kolkata Traffic Police) Facebook page is acknowledging complaints that are pouring in from different parts of the city and constantly keeping a tab of the traffic situation and giving a real-time update on the same to millions of commuters.

More than 1 lakh 30 thousand followers are making a beeline on the FB page of KTP and numbers are soaring with every passing day. Such an example was recorded on October 13, when a Facebook post of the Kolkata Police, conveying an emotional message on martyred Sub Inspector Amitava Mallick, received several hundreds of interactions from the common people of the city and beyond.

Talking about the advancement since the inception of the KP’s digital presence, another scenario made the elevation more evident. The Prince of Kolkata, Sourav Ganguly congratulated the Kolkata Police on Twitter on September 29 for the safekeeping and making the necessary arrangements during Durga Puja. The tweet, inducted into the Kolkata Police Facebook page later, had received more than 1,700 positive responses in a matter of minutes.

By witnessing this staggering feedback on social media, KP unfurled another account on Facebook. The account started receiving a staggering response since its inception. The well-written tales of grit and glory presented with a tinge of suspense is engaging more and more readers to the newly formed Facebook page of KP. The number of followers crossed 50,000 within a span of six months. 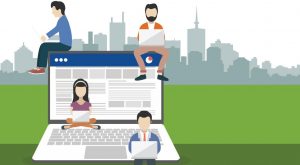 Kolkata Police has redefined policing through by establishing a strong interactive platform and by involving a huge swathe of population, experts opine. Trying to interact with the common masses of the city by portraying a humane image of the police personnel, a certain scenario caught the eyes of several people not too long ago. Dr. Bidisha Sarkar Datta, an employee of Sivanath Sastri College, wrote a Facebook post describing how two officers helped her find her lost purse in Gariahat during the Durga Puja. Datta thanked both of the police officers personally and told her faith was ‘reinstated’ on Kolkata Police following the incident.

Men in uniform have always been the favourite whipping boy of the media and often become easy prey of the naysayers. KP’s social media team in the recent past has muzzled all false accusations that were hurled against the men in white. They not only gave a befitting reply but also passed on the right information to the public which further beefed up security. Through their social presence, the Kolkata Police now often provides fraud alerts as well as traffic alerts, helping the residents of the city throughout the day.

Social media presence has opened several new alleys in front of the criminal investigation team of KP. It often assists, informs and navigates the future course of an investigation. This brand new strategy helped the police nab one Agniswar Chakraborty on October 10, an accused of rape and death threats on a social media platform. The incident and the aftermath was reported and carried out in news outlets throughout the nation.

Kolkata Police keeps a strict vigil on all the viral posts that are hovering on different social media platforms. Those are aimed at creating communal tension or even hints towards terrorist activities are immediately investigated by a special team of senior officers. Such a post was probed and later revealed on the Kolkata Police Facebook page on September 23. A screenshot of the video showed an aged male being manhandled by several parties, which was posted with the false pretenses that the person was being beaten up by the followers of another religion than that of what he followed. After a thorough investigation, the police revealed the original flow of the incident and took legal actions against “all mischievous people spreading communal hatred during festivities.”