Cracking an online fraud case has brought laurels for the Cyber Police station with Commissioner of Kolkata Police Anuj Sharma felicitating Inspector Denis Anup Larka. Anup has been conferred with the Cyber Cop of the Year Award for investigation and speedy conviction in a cybercrime case.

In addition, the Cyber Police Station of Kolkata Police has been awarded this year’s second best prestigious DSCI (Data Security Council of India) Excellence Award for capacity building of law enforcement agencies of the country. The award was presented at the DSCI Annual Information Security Summit -2020.

The case pertains to nabbing of a Nigerian national who fraudulently sent fake messages from a mobile number 708514**** to one of the senior government officials informing him that his Whatsapp number had won a prize of Rs2.75 crore in the Whatsapp Global 2020 draw and asked him to sent his details to the email address rbidelhi@rbigovt.in with an intention to cheat him. The accused was arrested from a remote place in Delhi after great effort.

The Ld. Court convicted the accused and sentenced him to six-month of imprisonment and imposed a fine of Rs 40,000. The team did the investigation very efficiently under the supervision of O/C-Cyber PS and secured conviction within a very short span of time.”

The Cyber Police Station of Kolkata Police has initiated an awareness campaign in society through seminars at school/ colleges/ universities/ government institutions against cybercrime. The police personnel of this station attend regular training sessions on cybercrime to sharpen their investigation skills.

The Cyber PS also has a dedicated Anti –Obscene and Stalking (ASK) helpline, which can be used by women victims of cybercrimes to register their complaints. 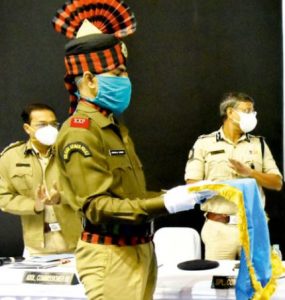 Located at Kolkata Police Headquarters, eastern India’s first cyber lab was established in 2020. It is a unique interface of law enforcement agencies and laboratories. The lab is set to propel Kolkata into a select league of cities like Mumbai, Bangalore, Pune, Thane and Madhuban having similar facilities.

Date Security Council of India has conceived this model to act as a resource centre and facilitate cybercrime investigation and training among police personnel probing cybercrime with cutting-edge tools. It has an in-house hands-on training facility for 18 people. Previously the Project Manager of DSCI used to impart training but now officers of the Cyber cell are imparting training. All the demonstrations and training sessions regarding new forensics tools are organized at the lab.

Presently, the Cyber Lab is being used for the internal Cyber Crime training purpose.

Apart from the Cyber Lab set up in 2017, one DISK Forensics Lab and one Mobile Forensics Lab were also set up at the Cyber PS to facilitate the Investigation of cybercrime cases.

For the last three years, Cyber PS, Kolkata has been in the finals of capacity building category and last year it won the second best award in the category.

After being felicitated by Anuj Sharma, Inspector Denis Anup Lakra, shared his views with the Protector magazine about the case for which he was felicitated.

He said that an SMS came from an unknown number on the government officer’s mobile notifying him that he had won a lottery in a WhatsApp competition. In order to claim the prize, he should click on the link and share his personal details such as name, address and bank details for registration to claim the prize.

After the complaint was lodged, investigation began on the alleged mobile number and the email ID. In the course of the probe, the service providers of the mobile number were approached for CAF, CDR and TL and information was gathered from the Public Domain Registry of the alleged domain.

During the lockdown period, there was a shortage of workforce still the telecom service providers scrutinised a huge amount of data including the CDRs and IMEIs.

Tower location of mobile phones was tracked and forensic tools were used to collect evidence against the miscreants. After detection, proceeding to Delhi during lockdown was a bit difficult, but the cyber team overcame all hurdles.

One person of African origin, a Nigerian national, was arrested from Tigri PS area, Delhi. The Nigerian national tried to escape, but the raiding team chased him for a kilometre and he was finally arrested. The team members also suffered injury while trying to apprehend the culprit.

When asked about his feeling after the award, the Investigating officer said that he felt humble, proud and honoured to have won such an award presented by the DSCI, Cyber Cop of India 2020. It’s a proud moment for Kolkata Police Force. Last year we were the runner’s up. Jai Hind.