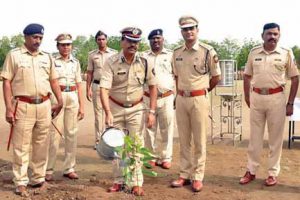 Maharashtra is the third largest state in the republic of India and has one of the largest police force in the country. The force comprises of 302 IPS officers serving the state, around 282 SP’s, 523 Dy. SP’s and thousands of police officers including PI’s, API’s, Constables etc. The numbers are increasing with more and more people opting for policing as a career. The 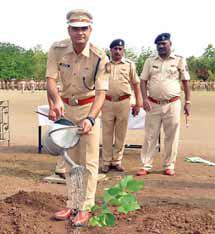 state has ten commissionerates, of which Amravati city police is taking rapid strides and moving ahead at a fast pace.

Currently led by Dattatray Mandlik (IPS), the Amravati police commissioner is a DIG rank officer designated as the Commissioner of Police and is assisted by Dy.CP- HQ (looking after police HQ, Crime Branch, Special Branch, and other branches of CP office). 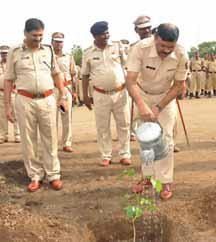 Dy.CP Zone (1) maintains supervision over police stations under the Frezarpura and Gadge Nagar Police division and Dy.CP Zone (2) is in charge of police stations of Rajapeth division and the Traffic Branch. The DCPs are assisted by Asst. CP’s and there are a total of seven sanctioned posts of ACPs in this unit. The total strength of officers comprising PI, API’s and PSIs is to 129 and the constabulary strength is 1745 as on date. 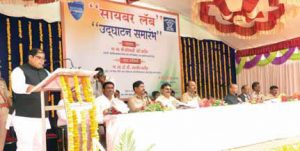 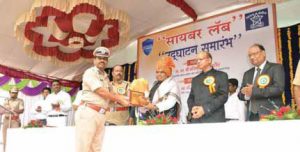 Amravati city has a population of approximately 6.5 lakhs as per 2011 census, and the rural population of another 1 lakh (approx.) comes under the police commissionerate. 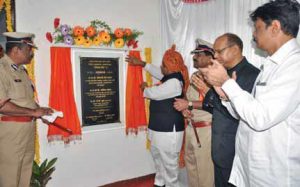 Apart from these three executive units, the crime branch of Amravati police looks after sensational crimes, economic offences and cyber crimes. The traffic branch is basically concerned with traffic regulation of the city. The special branch looks after intelligence collection, monitors emergency situations and law & order problems. Bomb detection and disposal squads have been assigned the responsibility of detecting and defusing explosives. There are other miscellaneous units like finger prints units etc. that basically provide support services to the police units. 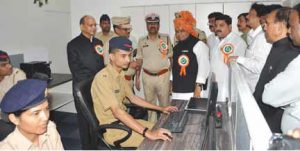 The police headquarters is under the administrative control of the Reserve Police Inspector (RPI) primarily looking after miscellaneous duties like guard duties, prisoner escort, riot control platoons, quick response teams and maintains other reserves that can be utilized in emergency situations. In the last five years, there has been a considerable increase in the number of constabulary after the landmark decision of the government where eleven thousand posts have been sanctioned every year for the Maharashtra police. 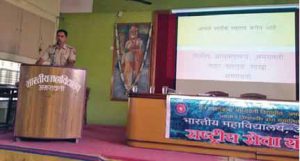 With the setting up of the police commissionerate at Amravati, the quality of urban policing in terms of quick response, better supervision over crime work, enforcement of law etc. has improved significantly. Certain magisterial powers which are otherwise vested in the district magistrate gets transferred to the officers of the police commissionerate. Some of the basic powers that gets transferred to the police commissioner and his subordinate officers include power of preventive actions under the Civil Procedure Code & Bombay Police Act; licensing powers under the Arms Act; powers to issue eating house licenses; performance licenses and powers of externment etc. 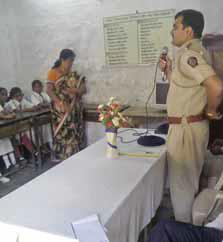 The quality of policing and the image of police in the city has improved considerably over the years due to the dedicated efforts of the police officers and men. Amravati police has done some outstanding work that needs tobe highlighted like the detection of the sensational Khandelwal jewellery shop dacoity case that led to the arrest of seven criminals and recovery of property worth more than Rs.25 lakhs in a short span of 10 days. 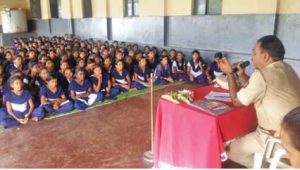 The accused have been charged under the provisions of Maharashtra Control of Organised Crime Act (MCOCA) and sent to jail. The police team was applauded for their commendable job and a reward money of Rs.60,000 was announced by the DGP for the police team that detected the offence. Another outstanding 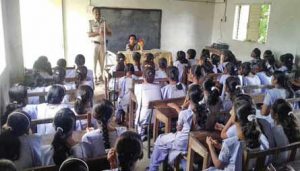 detection was the consignment hijacking and double murder case in December 2010. It created ripples in the minds of the people of the Amravati city and was detected within 10 days. Seven inter state criminals were arrested through extremely scientific investigation. Total stolen property worth Rs.17 lakhs was recovered. Several other difficult and mysterious crimes have been resolved by the Amravati police with application of extremely scientific and professional investigation. The officers and men of Amravati city police have proved that Law is supreme and everybody is equal, irrespective of the status and any offender would meet the same consequence in case of violation of law. 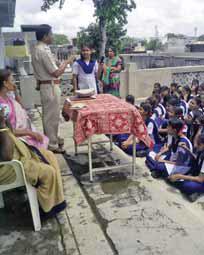 Speaking to a correspondent of Protector magazine, an officer attached to the Amravati police said, “Over the years the number of crimes recorded under our jurisdiction have been consistently reducing. Our police officials put in their whole – hearted effort to detect any case that gets registered. We have different divisions in the department based on the nature of crime like the economic offences, cyber-crime, traffic branch, bomb detection & disposal squads, special branch etc. and that helps in speedy resolution of the cases. 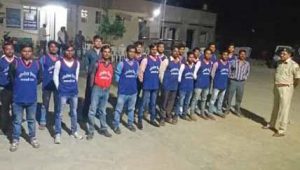 An officer attached to the traffic department said, “Due to the improving infrastructure and development, thousands of people migrate to Amravati leading to an increase in the population and rise in the number of vehicles on the road and other state transport facilities. The traffic department has set up its plan and are successful in getting the traffic under control during the peak hours. A team of police officers also monitors the movement of Amravati citizens so that in case of an emergency they can react in a short span of time.”

For the betterment of the local citizens the city cops have launched an initiative ‘Mission Jagruti’ with the motto ‘Aware Citizen-SafeCity’. Technology has become an essential feature of our life. The main purpose of this mission is to create awareness through social media, road safety campaigns, cyber safety campaigns and other measures. Students are the future of the country hence it is very important that they involve, participate and educate themselves about the events in the city. 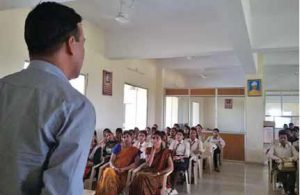 “We conduct lectures in colleges and schools to educate the students about cyber-crimes. Addiction to internet and social media has been proliferating the crime incidents, and it has become a topic of major concern. We are also encouraging more number of people to join us and be a part of Police Mitra so that we can keep a keen eye on suspicious elements in all the localities of Amravati,” said a police officer.

Views of the Citizens

“I am a resident of Amravati since last 25years. I have been a witness to the improvement of policing in our town. Cops have started several initiatives for citizen safety and we all appreciate their efforts and promise to co-ordinate with them at every step,” said Komal Jehte, student.

“Traffic has been an area of concern for Amravati citizens since it becomes stressful to reach your destination during peak hours. Amravati traffic police department has done a commendable job of monitoring the traffic jam during peak hours when most of the commuters are trying to reach their workplace. We salute the traffic police officers who brave the heat to keep us safe. Hats off to Amravati police,” said Pratibha Ringe, resident of Amravati.

“I appreciate the efforts of the city police in creating the awareness of cyber crime among the students since the youth today is addicted to the social media. Cops conduct lectures and rallies in school and colleges. This kind of policing is needed in the city,” said a 45 year old business man. 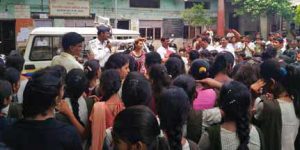 Police Sub Inspector Sanjay Chandrakant Chougule is a 2005 batch direct recruit officer. Working with the crime branch at Amravati police commissionerate, he has displayed exemplary courage and dedication in the area of prevention and detection of crime during his service period so far.

In Jan 2011, during investigation of an offence vide Kholapuri gate police station, PSI Sanjay Chougule had to visit Burhanpur (M.P.). He arrested the dreaded accused wanted in the said offence. A pistol was also recovered from him. 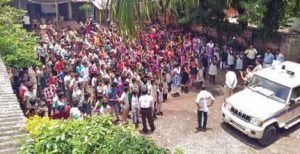 During further investigation, PSI Chougule along with a crime branch team left for Malkapur to trace another absconding accused in the said offence. Based on extremely scientific and professional investigation he managed to trace the location of the accused at Malkapur in Buldhana district. During his efforts to arrest the accused, PSI Chougule and the police party were fired upon by the accused. PSI Chougule in an exhibition of extreme bravery and courage retaliated the firing and made efforts to nab the accused. In the process, he sustained bullet injuries but continued the fight even after sustaining injuries. He was shifted to Malkapur hospital for medical treatment where he breathed his last.

PSI Chougule displayed conspicuous bravery, courage and dedication to his work and laid down his life while fighting dreaded criminals. For his outstanding service, he was rewarded 75 times in the past and in fact was the member of police team that was honored with prize money of Rs. 60,000/- in cash and commendation note by the Director General of Police, M.S. for outstanding professional workin detection of the sensational Khandelwal jewellery dacoity case at Amravati.