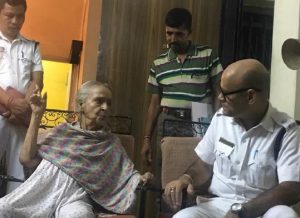 Elders are the most vulnerable sections of society. They not only need care but also security to lead a normal life. The Kolkata Police has come up with a noble initiative called ‘Pronam’ to keep them safe and secure. This scheme not only takes care of their daily needs but also boosts the confidence of their relatives living at far-off places.

An octogenarian Jyotsna Bose lives on the seventh floor of an apartment at Debi Chaudhury Road, Kolkata under Ekbalpore Police Station. Both her daughters live outside Kolkata. Out of the two daughters, one stays at Mumbai after marriage while the other is settled in Bengaluru.

Staying thousands of kilometers away from her mother, she is protected by a special elder care programme ‘Pronam’. A few months back, she needed medical help. There was no one to take her to a doctor. She called on Ekbalpore police station’s ASI Shikha Majumder and she immediately arranged everything so that she could see a doctor.

A team of officers regularly keep in touch with elderly people like Jyotsna across Ekbalpore Police station. But not just Ekbalpore, the entire Kolkata police are active to lend a helping hand to the elderly people.

In the changing paradigm of society, old people are living a secluded life from their kin due to socio-economic reasons. This has posed fresh challenges to the police force regarding their vulnerability.

The names of many elderly people have been registered with the Kolkata police to meet their security need.

Still, there are people who are yet to reach out to Kolkata police. In the wake of crimes against elderly people at Lal Bazar, the headquarters of Kolkata police has issued an SOP, (Standard Operating procedure) for all police stations. Policemen have been instructed to do a census of elderly people under their police stations. This database includes name, age, sex, address, and multiple contact numbers with email IDs.

Police are also asking for the list of neighbours and relatives who are in touch with them. Apart from that, police are also asking for the details of domestic help, including name and address and the name of their associates if there are any. Usually, an elderly person living alone has to meet many people throughout the day for different reasons including milkman, mason, plumber and vegetable vendor.

The senior citizens have been advised to install grills on their gates as a first line of defence so that if someone visits their house, they are not immediately exposed to the threat even after opening the door. The door hole viewer is not of much help with fading vision. New Alipur is a posh locality so cops have advised people to install alarms for an emergency. There is a proposal for direct phone lines to the police station to communicate with the police officers. The Officer-in-Charge of Alipore Prasenjit Bhattacharyya said: “Around 62 elderly people are registered with Pronam. A dedicated team is in regular touch with them. We are trying to minimize the risk by taking all precautions.”

Apart from preparing the database, to remain alert about their vulnerability, the police have been conducting workshops and interactive meetings at several police stations. The ideas behind such meetings are to sensitize people about the probable threats.   Recently Phoolbagan PS organised such workshops where the officers met with 50 elderly people. They were told not to open doors immediately to unknown persons. If a domestic help or a plumber or an AC mechanic brings an associate along with him, then they have to remain alert. 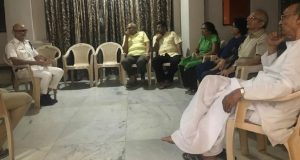 In the case of seeing an unknown person, elderly people have been asked to inform the police about such developments. Area-specific police officers have been deputed for beat meetings. Once in 15 days, the officers speak to or visit the elderly citizens. And a team of policemen keeps an eye on elders almost daily. The senior citizens have also been suggested not to keep valuables like jewelleries or cash at home. When they withdraw cash or have to deposit a big amount, they need to inform the local police stations.

Not just precautions, the police have been installing CCTV cameras at important locations and at the entrance of apartments to keep a tab on the entry of unauthorized elements.

Apart from creating the database, the elderly people are encouraged to get enrolled with ‘Pronam’ for their security. The police officers at Ekbalpore police station take care of the security of 38 senior citizens. Police inspectors regularly speak to them and visit their home once in 15 days. This initiative has helped the police to come closer to elderly citizens. The human face of police has earned greater respect for them. 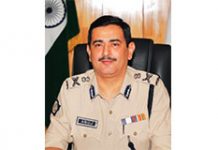 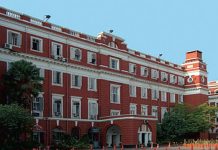