There are four ligaments in the knee that connects the femur or thigh bone to the tibia. 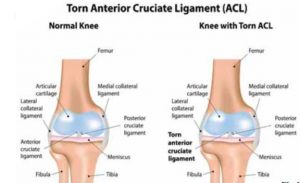 Biomechanics and Function of ACL

ACL injuries are classified into two categories, either contact, or non-contact, based on what sort of event caused the injury.

Contact ACL injuries are fairly self-explanatory; they are suffered when an object (usually another player) comes into contact with the player, resulting in a tear of the ligament.

Non-contact injuries on the other hand, occur without outside contact. They typically take place during one of the following movement patterns:

Due to the amount of contact, as well as the frequency of deceleration, cutting, and jumping, football, basketball, and soccer players are at increased risk for ACL tear.

Analyses of filmed injuries have indicated that the majority of non-contact ACL injuries occur while the athlete is in a position called knee valgus or valgus collapse2.

The opposing rotation of the upper and lower parts of the leg cause excessive force on the ACL (and possibly other knee ligaments) resulting in a full or partial tear.

The occurrence of overall ACL injury is 4-6 times higher in female athletes than in male athletes participating in the same sports (3).

A study analyzing 13 years of injury reports from division I basketball and soccer teams revealed that the incidence of non-contact ACL injury is also significantly higher in women than in men. 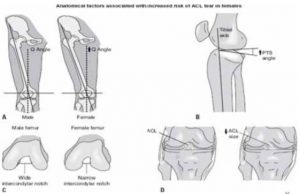 females on OCP not as affected during this phase

these variables showed similar direction and magnitude to those reported by Leppänen et al.11

The knee flexion and ground reaction force variables alone may be used to stratify ACL injury risk in this new cohort of athletes. In vivo knee ligament forces are important to consider for informing rehabilitation or clinical interventions. However, they are difficult to directly measure during functional activities. Musculoskeletal models and simulations have become the primary methods by which to estimate in vivo ligament loading. 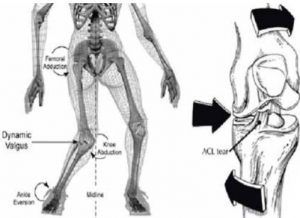 Non-modifiable factors include anatomical factors such as increased Q angle (figure), and hormonal differences between men and women5.

The Q angle is primarily based on the width of the hips, and since females tend to have wider hips than males, and therefore have higher Q angles which place them at increased risk for knee injury.

Additionally, hormonal fluctuations during the menstruation may also decrease ligament strength at certain points of the cycle. These are not factors which can be altered by training;.

Modifiable factors are those that can be changed through training, and include neuromuscular and biomechanical differences between males and females (5).

Research has shown that female athletes tend to display more valgus collapse than men due to weak gluteal musculature and poor medial hamstring strength. Women also tend land from a jump with straighter legs rather than more bent legs .

These deficiencies in muscular strength and biomechanical technique may be addressed in training programs in order to decrease ACL stress during athletic participation.

In addition to improving strength and movement technique, training programs can also be designed to improve the feed forward mechanism which is an automatic reflex where the body activates muscles in order to brace or protect itself in anticipation of a possibly dangerous situation. 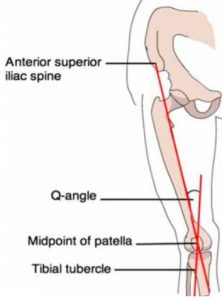 Research has shown that in untrained individuals, this protective reflex can take as many as 128 milliseconds, whereas ACL injuries are reported to occur in less than 100 milliseconds.

However, specific training can decrease the time required to produce this reflex thereby allowing the athlete to quickly brace themselves in situations where they may be injured.

Normalized moments like abduction did not predict subsequent ACL injury in mixed-effects logistic regression models, whereas absolute-value moments did predict subsequent ACL injury6. Actual and real (absolute-value) forces and moments do exist in nature; when applied to joints at high rates, they can rupture ligaments. Although it is a good idea to normalize forces and moments, so that populations with different anthropometric features (eg, height, weight) can be compared.

Prior injury is the single best predictor of second injury. Young, active athletes have exceedingly high second-injury rates for the ACL, in the range of one quarter to one third.7,8.

This risk level is unacceptably high. Young athletes with multiple serious knee ligament injuries by their early twenties have markedly increased risk of premature knee osteoarthritis, which will have a lifetime impact on their ability to remain active.

The high propensity for multiple injuries and osteoarthritis creates grave concern from the perspectives of sport participation and injury prevention. Furthermore, individuals often face psycho-sociological challenges during their time away from regular activity. With such short- and long-term effects of ACL injury, health care professionals should strive to prevent these devastating injuries.

Most second ACL injuries occur within 2 years after the first injury, suggesting a too-early return to activity, or rehabilitation protocols that may be insufficiently implemented.

Numerous studies9,10,11,12,13 have shown biomechanical and neuromuscular deficits in both limbs after ACL reconstruction and that these modifiable deficits accurately predict second ACL injury.

Recently, rehabilitation programs have been urged to target modifiable risk factors for second ACL injury, particularly for younger athletes, who are likely to have the greatest benefit. Screening for modifiable risk factors followed, with targeted intervention programs prevent second ACL injury. The translational aspect of injury prediction modeling is addressed in terms of providing accurate advice and counseling to athletes with ACL injuries. Multidisciplinary approach is essential to achieve the critical goal of markedly reducing the rate of second ACL injuries.