When a crime takes place, the entire area or location where the illegal act occurred is cordoned; most of the physical evidence is recorded, numbered and photographed as well as retrieved by trained law enforcement personal, crime scene investigators and forensics scientists to build up the case through circumstantial evidence, eventually solving the case.

There are various steps and protocols leading from the initial stage of investigation till the case is solved and wrapped up. This is where crime scene management comes into the picture. Crime scene management skills are an extremely significant task component of investigation because evidence that originates at the crime scene will provide a picture of events for the court to consider in its deliberations. That picture comprise of witness testimony, crime scene photographs, physical exhibits and the analysis of those exhibits, along with the analysis of the crime scene itself.

Criminals use the latest technology for their modus operandi. Hence, most of the crimes are very complex to solve. The crime scene has a wealth of clues and physical evidence which is crucial for investigators and forensics. Inadequately-managed scenes can result in poor quality evidence being used, ineffective investigations and/or wrongful convictions.

A crime scene contains significant information that if sought in a systematic, legal and scientific way, helps determine what has happened and who was involved. It is the crime scene examiner’s responsibility to know how to gain the most from the crime scene.

Crime Scene Management (CSM) involves on the teamwork of different agencies like police, forensic scientist, medico–legal doctors, judiciary officers and other experts as per the requirement of the case. The interaction of the above agencies leads to a well coordinated team effort to handle the most complicated cases.

Golden Rules for an Ideal CSM

Reconstruction of a Crime Scene

This needs to be done in a scientific way to assess the crime scene appearance, location and position of clue materials and physical evidence, documentation from witnesses, victim, data depicting the condition of the physic evidences, crime scene, and suspect. Normally, a hypothetical formulation is devised based on scientific testing.

Reconstruction of crime scene normally depends on the nature of the crime and the physical evidence at the crime scene.

Criminal Profiling: Of late, criminal profiling has gained importance in crime detection. Psychological theory is applied to analyse the offender’s behaviour during the commission of crime. The offender is directly involved in committing the crime, and he is the only person who knows why the crime is committed, when and where the crime is committed. His psychological examination can reveal a wealth of information about the crime thereby aiding in understanding the reason why the crime was committed.

Polygraph or Lie Detector Test: This technique detects deception by monitoring, recording, and analysing the physiological changes that occur in a person when he/she responds to questions related to the crime. For this purpose, parameters like Pneumograph, Sphygmograph, Galvanograph, are used.

Brain Signature Profiling: Developed by an Indian Neuroscientist – Prof. Mukundan, it can isolate an individual involved in a crime by the measurement of electrical activation in various parts of the brain related to memory. The activated electrical signals are recorded and analysed automatically by the brain electrical oscillation signature profiling (BEOS) system to finally produce a report indicating the presence or absence of experiential knowledge of an act or a crime in an offender.

This technology is being implemented by the Union Ministry of Home Affairs (MHA) in collaboration with Technology Information, Forecasting and Assessment Council (TIFAC), an autonomous organisation under the aegis of the Department of Science and Technology, Government of India.

The Ministry of Home Affairs has given the pilot study project to the Directorate of Forensic Science Laboratories, Gandhi Nagar, Gujarat. Subsequently, all forensic science laboratories in the country will be hooked up to this facility.

Remote Electronic Data Forensics Kit: The preservation of onsite digital data is critical in many types of investigations. Imaging of computers and associated media should be considered in all cases where further investigation or disclosure may be required. Capturing this data using forensically-sound methodology is vital if the integrity of any subsequent investigation is to be maintained. It is a user-friendly kit to execute the operation with utmost ease, with very minimum training required.

The storage media is connected to the kit and powered on. Without any command or inputs from local staff, the device directly gets connected to one or multiple remote control rooms through secured internet connection. Multiple experts can view, analyze and access the electronic data while the raid is ongoing. Experts from various locations can also take a secured image on a local device. 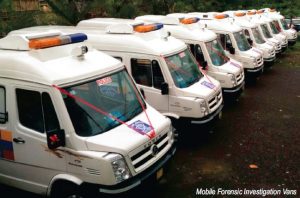 Mobile Forensic Van: The Gujarat Forensic Science University (GFSU), Gandhinagar, in a joint venture with Helik Advisory Ltd., Mumbai, has developed a Mobile Forensic Van (MFV) to help reach the crime scene at the earliest and assist the investigating officer in identifying and collecting relevant forensic evidence from the crime scene, victim and suspects. The MFV is fully air-conditioned with modern amenities to perform spot testing. It also has the facility to sketch and take photographs of the crime scene, both in still and video modes. It has all the latest hi-tech forensic tools and kits like gunshot detection, explosive, narcotics drug, DNA collection, blood test, etc along with a special multi-tunable light source which has eight different wavelengths thereby enhancing the detection capabilities for latent fingerprints, body fluids, hair and fibers, gunshot/explosive residues, bite marks, questioned documents, tyre tracks, shoe prints, narcotic drugs, etc.

GFSU has developed the complete technology of the MFV vans including scientific kits compilation to the type of interiors suitable for the van. The entire concept of MFV is monitored by a specialized executive committee of personnel who have been pioneers in the field of forensic science. 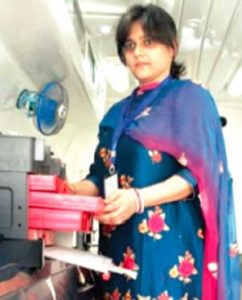 immediate protection to victims of rape and sexual assault. It will be equipped with state-of-the-art portable forensic kits aiding the victim and collecting relevant forensic evidence from the scene, victim and suspect. The van will be manned by women forensic scientists along with a forensic nurse. Apart from basic forensic investigation equipment, the van will be equipped with portable kits like blood, semen, saliva, DNA collection and preservation kits, bite marks and dental pattern collection and preservation kits, and sexual assault evidence collection kits. This will guarantee immediate aid to victims and also reduce the occurrence of such heinous crimes.