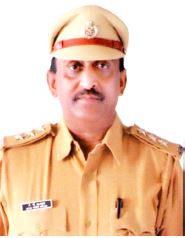 My name is DP Chudasama. I am currently attached to Gujarat Police as Assistant Director (HQ), Anti-Corruption Bureau. I completed my training as a police officer in 1996. My first deputation was at Gandhinagar District as a Sub Inspector. I was attached to this district till 2002.

My posting was at Sector 27, Gandhinagar, which is close to Akshardham, a large, majestic, intricately carved temple which stands amid sprawling gardens set in a 23 acre plot. The temple opened on October 30, 1992.

On September 24, 2002, while I was in my quarters, at around 5 pm, I received a call about an attack at Akshardham Temple. I was asked to reach the spot immediately. Along with six police officials, I reached the spot within 5-10 minutes. The Police Force as well as the State Commando Force had also reached the premises within 10–15 minutes of the attack. It was a sight one would not expect to see when one goes to a temple. At the entrance of the temple was the body of a woman who was shot dead by the terrorists. As we went a few feet inside the complex, we encountered two to three more dead bodies lying in a pool of blood.

This was the first time a terrorist attack had taken place in Gujarat. Thus, most of us were, maybe, naive on how to tackle such a situation. Our SP – R.B. Brahmbhatt immediately called for backup from the State Reserve Police Force, Border Security Force and other standby units of the Police Department.

Having been posted in Gandhinagar for many years, I was familiar with every nook and corner of the temple and the people living and working there. The main temple area has a unique locking system wherein it can only be locked and unlocked via remote control. So, the first thing we did was locked down the door so that the terrorists who had entered the premises would not be able to escape.

As dusk was fast approaching, we arranged for powerful lights in the area so we can keep watch over the terrorists’ movement. Around 7 pm, while on the lookout for the two terrorists, we noticed that they had climbed atop the parikrama, the outer perimeter of the temple. They started firing at us. Fortunately, none of us were harmed.

In the meantime, BSF Commandos, officers from the Crime Branch and the DGP office had reached the spot and analyzed the situation. A team of police officers were asked to move towards the back side of the temple. While the team was taking their positions, the terrorists threw grenades, injuring some of our officers. The others managed to escape. 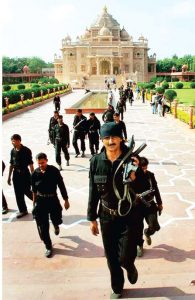 A team of commandos gave us cover firing while SP R.B. Brahmbhatt, Sub Divisional Police Officer (SDPO) – Girish Singhal, myself, and some commandos escorted the visitors from around the complex to safety. Volunteers helped transport the injured to nearby hospitals.

The police and commandos searched for the two terrorists who were forced to retreat to an alternative hiding spot. During this temporary halt, they also guided the remaining 300 visitors to a safe location outside the complex.

Later that evening at around 9 pm, with the terrorists still at large, we decided to comb and sanitize the area for bombs etc. We noticed an injured SPRF Commando in the very area where the terrorists were present. He was left immobile by a grenade attack. The SP, some police officers and I, decided to rescue the commando. As we were doing our best to save him, the terrorists fired back at us. I was hit by two bullets. The SP and other policemen were also injured. The serious wounds on the left side of my body left me unconscious. I was later rushed to the local hospital for treatment. Meanwhile, the NSG Commandos from Delhi had reached Akshardham and took charge of the operation, which came to be known as ‘Operation Thunderbolt’ or ‘Operation Vajra Shakti’.

Never anticipating that such a heinous crime would occur at a place of worship, security was therefore quite relaxed. The terrorists had done a proper reconnaissance of the temple complex, so they were very bold in entering and attacking it. 39 civilians were killed, and more than 67, including policemen, were injured during the attack. We also lost two officers from the Gujarat Police SRP 2 Commando and two NSG Commandos.

The operation lasted through the night. The two terrorists were eventually killed by the NSG Commandos the next day.