e-GujCop is a unique application developed by the Home Department, Government of Gujarat, to build a database of crime and criminal information for a strong decision support system to police officers, leading to effective crime prevention and detection. The project was launched by the erstwhile Chief Minister of Gujarat, Shri Narendra Modi, in 2013.

The eGujCop app is being used by over 90,000 officers and employees of 713 police stations and multiple offices of the police department across the State. More than 10000 PCs along with required printers, scanners and finger print devices have been provided to police stations. 24×7 primary connectivity over GSWAN and secondary connectivity over GTPL is available. The SCRB has set up a 24×7 helpdesk to cater to everyday issues faced by the staff pertaining to hardware, software and its functionalities.

For such a large scale project with change of process from offline to online, it becomes of paramount importance to train end-users in the online functionality usage of the app. SCRB has trained police personnel at police stations and officers of all ranks in its usage. The training curriculum has also included its training for fresh recruits. Regular refresher courses, training of trainers (ToT) are also organized by SCRB. This Bureau has been chosen by National Crime Records Bureau (NCRB) as the Western Region Police Training Centre where training is regularly conducted for Gujarat as well as in Goa, Madhya Pradesh, Maharashtra, Rajasthan, Jammu and Kashmir, and Div-Daman.

Digitization of 1.4 crore historical paper-based records from 2004 to 2013 was completed to form a central data repository of crime and criminal data available at the click of a mouse across 713 police stations as well as offices of senior supervisory officers. With this digitized historical data and subsequent live digital data entry from 2014, the app currently has over 23 lakh records of FIRs, over 23 lakh records of arrested persons including photos and over 58,000 records of missing persons including photos. 99% of the FIRs are made available online within 24 hours of lodging, and can be accessed by citizens on the Home Department website as well as through Gujarat Police Citizen Portal.

Since May 2018, the e-Gujcop app has consistently secured first position in the Prime Minister Office’s evaluation – Pragati Dashboard.

This unique flagship project empowers the Gujarat Police personnel for SMART (Sensitive, Modern and Mobile, Accountable, Reliable and Responsive Techno-savvy) policing. The project was launched by the Chief Minister of Gujarat on April 16, 2018. Using the vast e-Gujcop database, SCRB Gujarat developed several mobile applications to aid investigation officers in crime prevention and crime detection. Under this project, 4,900 mobiles have been purchased and allocated to all investigation officers up to the rank of Sub Inspector. Data of criminals, crime details, modus operandi, etc. are now available to police officers in the field in real time. These apps also benefit citizens by improving the quality of investigations and expediting the process of police verification for passport. 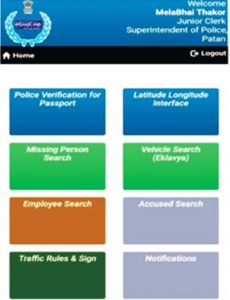 Investigation officers can search details of arrested persons based on name, alias name, FIR number, police station and act/section of crime of the entire Gujarat. Earlier, access was restricted to criminal records of police station only, but this application has enabled officers to access criminal database of the entire State. What would take hours through manual search now takes place in a few seconds, thus improving efficiency of investigation. 1900+ cases have been detected ever since the launch of this project.

This app enables police officers to search and get quick information as well as churning out details when there is incomplete information on vehicle registration details based on registration number, owner’s name, chassis number, engine number, colour, model and make. It also helps in traffic regulation and generation of e-challans, detecting stolen vehicles and vehicles involved in crime. 1150+ cases have been detected by field officers through this app.

This has been designed for internal communication within the police department. All notifications, important instructions, government regulations, circulars and standard operating procedures (SOPs) for investigations are pushed through this app to all police stations in charge and investigation officers. Thus, all important instructions and SOPs are available for ready reference on their mobiles even while they are on the field. It has led to tremendous enhancement in the effectiveness and efficiency of police officers as well as optimises manpower deployment in police stations and in the field. The DGP, Gujarat, has initiated the ‘e-Cop’ award to promote and reward usage of technology in crime prevention and detection.

Citizen Portal and Citizen First Mobile Application: As eGujCop project progresses to scale new heights, the ultimate aim is to provide best services to the citizens of Gujarat, with least inconvenience to them. These two apps, developed by SCRB, were launched in 2017 and 2019 respectively. 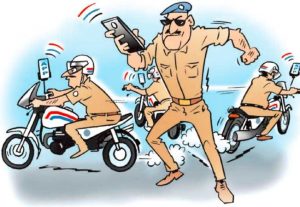 These two apps provide a bouquet of 15 online services to the citizens wherein they can view and download FIRs, file e-application, report and search for missing person/s, report missing/stolen property, driver registration, senior citizens, tenants and domestic servants, apply for police verifications and no-objection certificate, search for arrested/ wanted accused details, unidentified dead body details etc. These requests are processed through eGujcop app by respective police stations. Citizens can use these online facilities by registering on the Citizen Portal or by downloading Citizen First Mobile Application. Upon registration, they are provided with a unique ID through which they can track their application online.

These apps saves the citizens’ time and cost of commuting to police stations. They are extremely helpful to senior citizens and housewives who are unable to visit the police stations to redress their grievances. ­Disposal of applications is continuously monitored by senior police officials to ensure quick response and effective disposal of cases.

eGujCop is constantly evolving with the introduction of new functionalities for the Department as well as for the citizens. Technology stack is being constantly upgraded to provide superior performance and availability of the system. Currently, eGujCop is being migrated on Cloud, which is hosted by Gujarat State Data Centre. 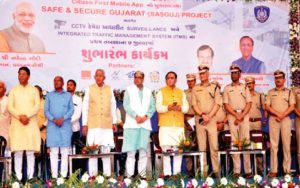 It will become the first such CCTNS application in India to be hosted in Cloud. This step will ensure  scalability, better centralized and harmonized management of the entire software and hardware ecosystem. This will make the eGujCop platform future-ready to accommodate the expansion of functionalities and the ever-growing integration with State and Central Systems. Integration with the Central Government’s Inter-operable Criminal Justice System (ICJS) system is underway. This integration will introduce electronic data exchange between the different stakeholders of the criminal justice system resulting in fast-tracking trials and better conviction rate. Crime Analytics and Facial Recognition software will also be introduced to improve detection rate and to move towards predictive policing.